He had no beauty or majesty to attract us to him,
nothing in his appearance that we should desire him. (Isaiah 53:2)

In a world where we have christian celebrities and dynamic, attractive preachers, I think this verse becomes significant. What draws people to our message? Is it our attractiveness, or are we attractive because of his presence in us? It reminds me of a story from the Brush Arbor meetings in Kentucky - one Methodist preacher became famous for the powerful sermons and manifestations that followed his preaching, but the other extraordinary feature about this preacher was that he was, "just about the ugliest man you had ever laid eyes on."

Not to say we shouldn't be well groomed or present ourselves as best as we can, but the question is what do we put our confidence in? Are we confident because we look good: or do we lack confidence because we feel we don't look good enough? In the end what does it matter? It's the anointing of God and his presence in our lives that makes us the most attractive.

It's difficult to imagine that Jesus may not have been attractive. The more I know of him the more lovely he becomes. When artists paint him or when visions are seen he is always beautiful. But what else could he be? To know him is to love him. To love him is to be attracted to him in such a powerful way that we cannot help but portray him as beautiful.

Isn't it just like God to come to earth as an average (even below average?) looking man? God rarely works within the systems that our world has created. God always turns our systems upside-down. There was nothing in the natural that would attract us to him. It was his divinity and supernatural anointing that drew the world to him. How awesome that as he walked the earth people were drawn to him because of what poured out of him. He was the resurrection and the life, the bright and beautiful morning star. Those who were religious were repelled by him, but those who recognized their need for a savior couldn't stay away.

Posted by Unknown at 7:43 AM No comments: 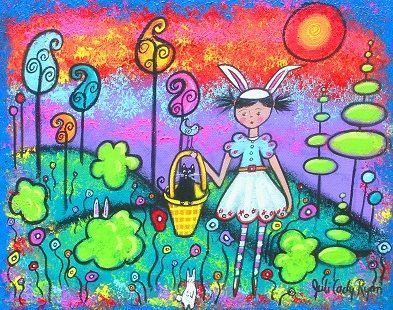 Consider this my two cents regarding the latest Internet phenomenon that says Easter is really based upon a Babylonian goddess named "Ishtar" - the goddess of fertility whose symbols are eggs and bunnies.

Since turning my life over to Christ in 1990, I've witnessed many bans and boycotts. From Disney, Halloween, to Santa Claus and Christmas and then Easter (the first campaign, not the most recent.) I use to jump on some of these “ban” wagons, I felt duped, I had long been ignorant of too many pagan/worldly agendas. But then I noticed that many Christians who led and participated in these campaigns felt more passionate about their causes than they did about the cause of Christ to save a lost and dying world. It seemed like a bit of a double standard. I backed away and came to terms in my own heart. Many Christian campaigns put a wall between me, and the people in the world that God loves.

That year I started deliberately giving candy to the kids who came to my porch on Halloween, I bought a Mickey Mouse watch, I helped my Mother build her Santa Claus collection and I celebrate Christmas (even though I know Jesus wasn't born on December 25th.) I try and put Christ in the center of everything in hopes that the world might see Christ in me. I left all the info-maniacs to fend for them selves. When Christ becomes the center he easily trumps all other pagan symbols and gods.
Easter falls near Passover ... Christ was crucified on Passover. This year, 2013, Passover began March 25th and Ends April 2nd. All throughout history we can trace Easter and find it occurs on or around Passover. Coincidently In the northern hemisphere Easter is celebrated in early spring. I like the fact that Easter falls in the spring because the whole earth is resurrecting from a wintery grave. Even the animals know it is time to reproduce. Spring is a time of new life and fruitfulness. The resurrection power of Christ made my life new and fruitful.
I used the Daily Beast as my source to do some research. I purposely chose a non-Christian source because I didn’t want to be subjected to the biases that unconsciously occur when articles are written. This is a segment from Megan Mcardle’s article. 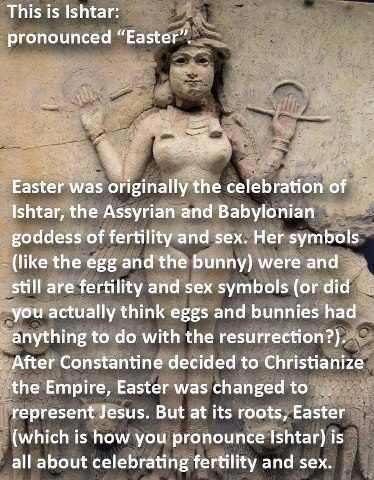 “ ... Easter is an English word.  The Greeks and Romans called it Pascha, which is why Easter is Pasqua in Italian, Pascua in Spanish, and Paques in French.  How exactly did the name of a Canaanite fertility goddess skip all the way to England from the Middle East without stopping in Rome or Byzantium? Ishtar was the goddess of love, war and sex…

Ishtar was associated with fertility and sex. However, her symbols were the lion, the gate and the eight-pointed star; I can't find any evidence of eggs or rabbits symbolically belonging to her. And Easter has nothing to do with her.

Most scholars believe that Easter gets its name from Eostre or Ostara, a Germanic pagan goddess. English and German are two of the very few languages that use some variation of the word Easter (or in German, Ostern)... Most other European languages use one form or another of the Latin name for Easter, Pascha, ... derived from the Hebrew Pesach, meaning Passover."


Which is it? A Babylonian pagan goddess or a Germanic one? And what about the word in other languages, the ones that don't use a derivation of 'Ishtar?' Does anyone get why this bugs me yet? The true gospel message is consistent in every culture and every language. It is consistent in every hemisphere whether it is springtime, or not. These other “ban” wagons are distractions from the true message.

The bottom line for me is that we must resist being sidetracked from the true focus of the Christian message. I am Christian because Jesus Christ the Passover lamb died for my sins and ransomed my life from the grave. There is no greater message in the world than the redeeming message of God’s Love. “He loved me (and the rest of the world) while we were still sinners." Pagans - Hedonist - Communist.

May the Spirit of Jesus Christ Rise up in his church!

Happy Easter!
Posted by Unknown at 8:56 AM No comments: